Due to the increasing issue with coyotes around here showing up at all hours of the day and night, I decided to spring for a weapon mounted light.

After reading a gazillion reviews and seeing a lot of cheap trash that comes through the shop, I decided on a Streamlight TLR-1 HO. This thing is bright, output is supposed to be in excess of 600 lumens.

It literally turns the dark into day. While its not something I would use in the house due to its brightness, where I live you cant ever have enough light in the dark. It was purchased from Amazon and I got it in two days.
After playing with it I really like it. I’m a big believer in the KISS principal and I’m not one to add 20 pounds of gear to a rifle but this one is worthy of placing on the gun.

Another aspect I like is that you can detension it with a quarter to take it off and if you need it you can place it on,tighten it up and then you are good to go in less than a minute.
Here are a few pictures.

Another added plus is that it is easy to operate, a smile push with the left thumb will go to full on, intermittent or strobe. In addition to that, the Aimpoint Pro that is on there really compliments the whole setup and it is easy to see the read dot.

A shot on a running coyote should be no problem.

First picture shows a close up of the light. Second pic gives you an idea of how it looks.

Picture no.3 is showing the light at 100 yards. It pretty much lights up the world in front of you.

The last picture is shown looking through the Aimpoint PRO optic. That red dot really makes it easy to aim with the light on. 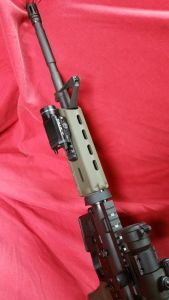 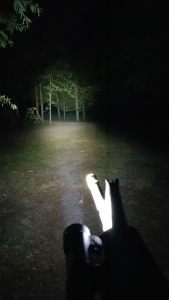 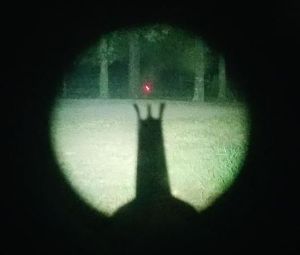 I'm a retired Machinist. I worked at the local Nuclear Plant making tools and things. I also have an 07 FFL as well as an 02 SOT, which allows me to build some cool stuff. I'm a part time Deputy Marshal for a small town close by, it keeps the adrenaline flowing once in a while. I sell suppressor's, do custom rifle builds and some totally off the wall stuff.
View all posts by Bob →
This entry was posted in Uncategorized. Bookmark the permalink.